The book, ‘Rex Backhaus-Smith – an artist’s journey’ by Jill Brannock, gives a delightful insight into how a young man seemingly destined to eke a living off the land, steadfastly followed his inherent need to educate himself, to travel and to create, but equally depicts the gentle character of a man as comfortable preparing a sheet of Arches as he is establishing a bush camp. His bush skills have often been remarked upon by those who have travelled with him along the Strzelecki Track or through the Tanami, while his artistic abilities have been admired and studied by many. 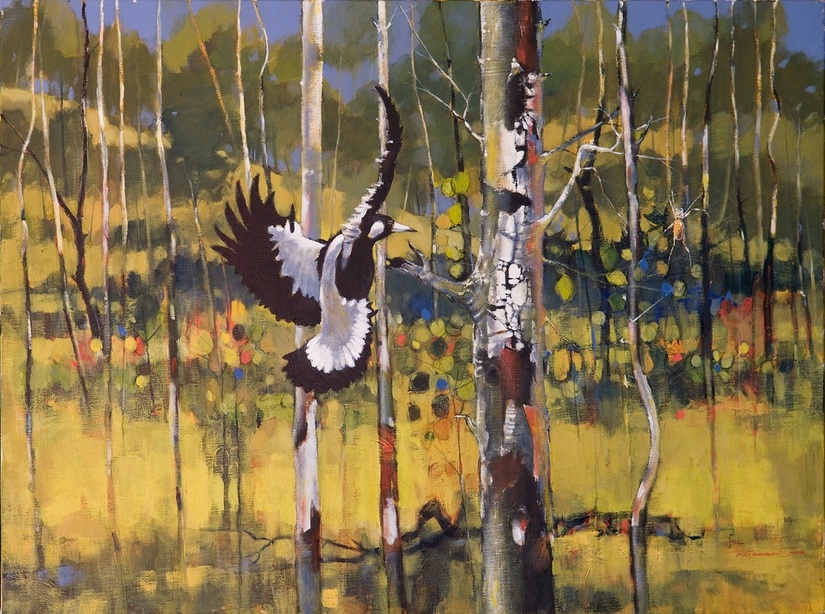 Prints available of this painting
His new collection sees him return to canvas after decades working with only watercolour and gouache,
but it is his understanding and depth which remain the keys to his images. Backhaus-Smith is recording the Australian outback not for nostalgic or patriotic reasons, but because the bush and art constitute his very life-blood.

"Rex is a dedicated and innovative artist who has deep feelings for the land. He has the technical and creative ability to portray, sincerely and well, what he obviously loves."  - Clifton Pugh (artist)

Such genuine sentiments show that Rex Backhaus-Smith is one of Queensland's most celebrated and inspired artists. Having made the Sunshine Coast hinterland his home now for nearly ten years, there is plenty of inspiration from his everyday surrounds, but this has not curbed his curiosity to experience different parts of the world from Greece, Spain or Morocco to Bali, Thailand and Java and yet his greatest influence and love is the Outback. Rex's childhood and much of his life as a teacher was spent in Western Queensland and his fascination with the landscape, its creatures and history are the sources of many major works.